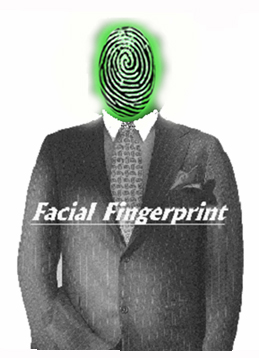 Thermal infrared imaging was proposed as an approach to face recognition beginning in 1981.  In addition to its performance in total darkness, use of thermal imaging for face recognition  have other significant advantages over face recognition using visible light (VL) imagers.  They  include greater density and complexity of identifying features from IR, which  provides ability to  distinguish between identical twins and the ability to positively ID based on a partial face.

Two noted limitations of thermal IR face recognition are the inability to see the eyes through  eyeglasses, and lack of reference databases of IR facial images. Both have been overcome.   Using 3DIR provides pose determination without the eyes, and the areas blocked by  eyeglasses leaves the majority of structures available to compare.  Other obstructions of the  face image by hair, hats, and other people, and differences in head rotation between two  images may still allow quantitative comparison between them.  Aside from colors, the IR facial  image contains the surface features used for VL face comparison, and those can be used for  cross-spectral comparison against a database of VL images.

IRID Inc. and its predecessor have developed biometrics for specific applications over the past  30 years.  IRID principals obtained the initial patents covering positive identification of faces  and body parts by 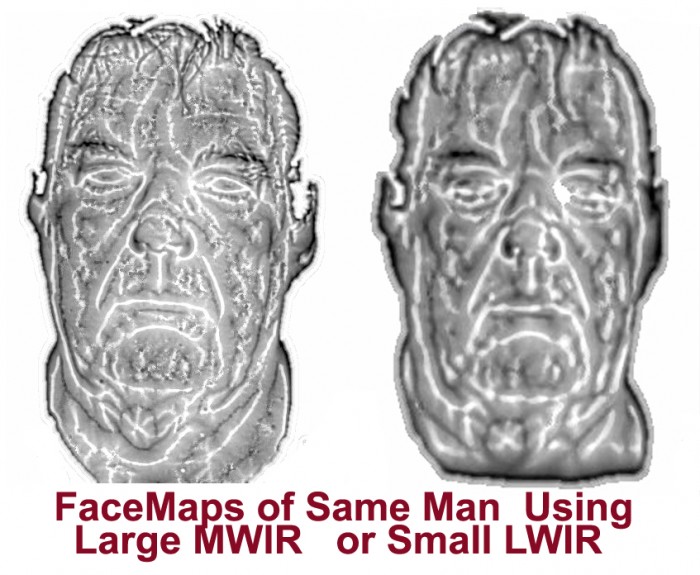 analysis of superficial vascular structure extracted from thermal IR images.  Several controlled studies proved the uniqueness and persistence of extracted FaceMap  structure through variations in ambient and body temperature, metabolism, heart rate, and  pose.  Extraction and comparison of curvilinear structure patterns, called FaceMaps, is  somewhat analogous to processing of fingerprints, including methods for comparing partial  latent prints. FaceMaps have the advantage of knowing the precise orientation even of partial  faces.

A three-year project under the NIST Advanced Technology Program studied the consistency of  IR FaceMap details with changes in spectral band from MWIR to LWIR, cooled to uncooled  detectors, and detector array size from 320×240 (medium) to 640×480 (large).  Under  Institutional Review Board oversight, human subject trials also included twelve pairs of  identical twins, and subjects sometimes wearing eyeglasses and sometimes having facial hair. 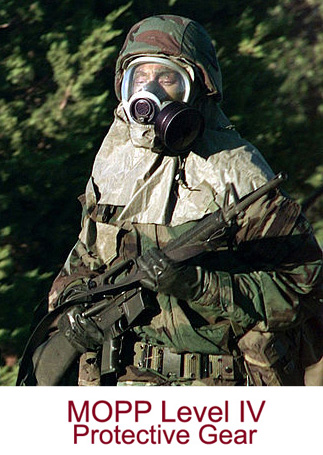 Areas of the body other than the face can also provide positive identification from 3DIR  images.  Personal Biometric Key utilizes a relocateable worn sensor plus wireless link to  provide continuous or query-response identification and vital signs from combat forces and  first responders wearing protective gear, including MOPP Level IV.  The same PBK can be  used within aware spaces to access restricted locations, equipment, and information touch- free.

In searching for anatomical correlates to the IR FaceMap features, 3DIR analysis generated greater density and complexity of vascular features than are commonly show in anatomy text illustrations of the superficial vascular system. However, image studies were found of fresh cadavers that had been injected with lead oxide to maintain minute vascular structures that normally cannot be seen at autopsy. These were found to have similar complexity and distribution as the FaceMap structures.

Accuracy of identification from IR FaceMaps was studied via ROC analysis. When plotted with other face recognition methods from the Facial Recognition Vendor Test of 2006, IR-ID achieved the lowest error rate. All FRVT participants used visible light imaging under controlled lighting and pose conditions. The IR-ID testing used only infrared imaging, and uncontrolled ambient conditions, Also, subjects included identical twins for the IR-ID testing but not for the FRVT.

Key advantages of IR-ID over other biometrics are: 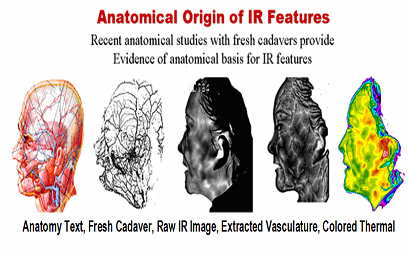